History of the Site

The farm is located at an old church site from 11th century. The site has a special atmosphere. It is no wonder why someone would build a church here... or a place of worship (if we think of a time before churches were built.) Who knows.

We do know that this Hou Church is of Roman architecture, and  was established around 1100 A.D. as the Benedictine Convent of "Norræ Closter" (GlenstrupKloster), dedicated to Virgin Mary. Six churches belonged to this convent and were owned by the great land owner Mr. Svend Bo and his wife MrsIngerThott.

We know also that in 1445, it was taken over by the Birgittiner Monestary in Mariager. We know that various granite stones, with carvings, were taken from this Hou Church to the Mariager Church.

Taking into account the heavy stone foundation still left on the site and the large granite stones removed to be taken to the nearby church, it’s likely that this church was completely built of stone and may have been a version of the one at the museum in "HjerlHede, Denmark". I guess the remaining stones have found their way out in the neighborhood for various good purposes...

A fence allows for easy public access. It’s a place for silence. 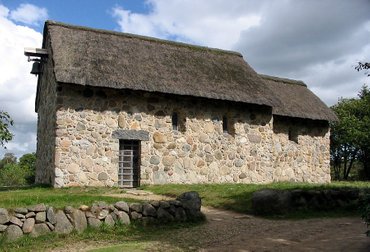